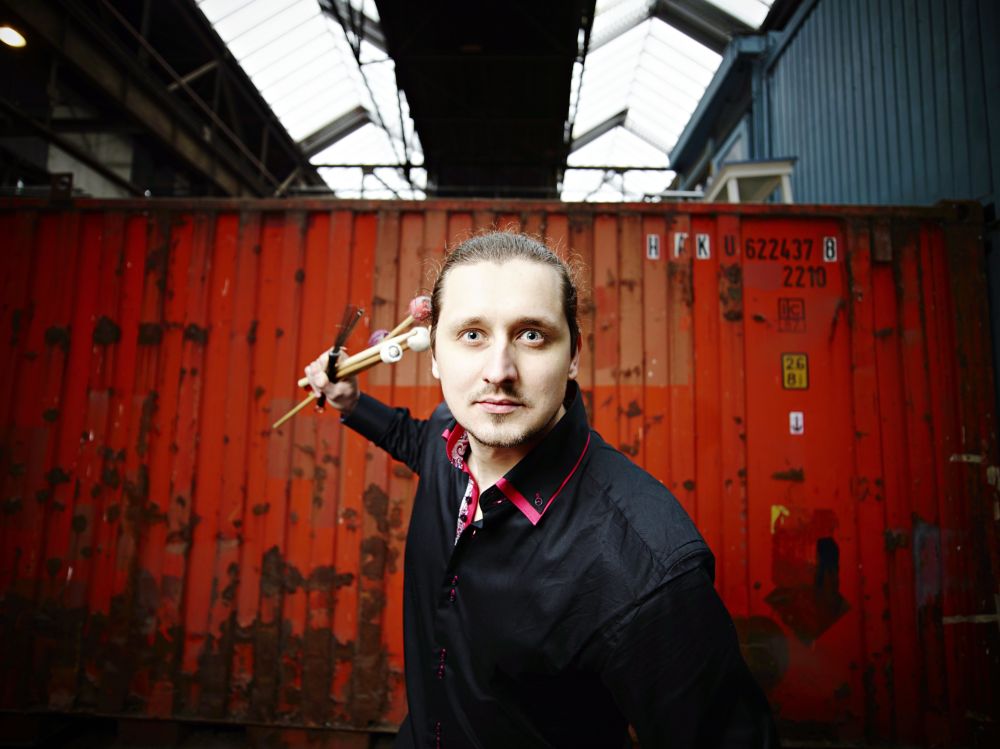 Konstantyn Napolov (1987) is one of today’s most outstanding percussionists. An impassioned pioneer and promoter of new music, he closely cooperates with leading composers. Internationally, he is in great demand both for solo recitals and percussion concertos with orchestra, as artist in residence in chamber music projects, and as a jury member in important competitions. In performances throughout Europe and beyond, he plays repertoire and instruments from all over the world and the entire music history. He astonishes audiences and the press alike with the imaginative power of his playing and his virtuosity.

Konstantyn is constantly in search of new and unheard sounds, from the most subtle to the most powerful and overwhelming, and always involved in a variety of projects. He loves to challenge himself and the composers he works with to push the boundaries of playing techniques and to explore the sound possibilities of percussion instruments to the utmost. The many composers who have written new work especially for him, always in close collaboration, include Maxim Shalygin, Tansy Davies, Christiaan Richter, Jan-Peter de Graaff, Moritz Eggert, Martijn Padding, Aart Strootman, Robin de Raaff and Klas Torstensson.
Celebrities such as Kaija Saariaho, David Lang, Louis Andriessen, John Luther Adams, Unsuk Chin, and Philip Manoury have also worked with him personally. With Steve Reich he cooperated in performing his masterpiece, Music for 18 musicians for 5000 listeners at Lowlands Festival in the Netherlands.
To enrich the Dutch percussion repertoire, he set up his foundation, the Dutch Golden Collection, with which he facilitates his commissions and film and CD recordings of new work. He has realized over fifty world premieres so far. As a director, he supervises his music videos that are critically acclaimed at international film festivals.

Konstantyn forms a permanent ensemble with pianist Laura Sandee and cellist Maya Fridman and commissions new work for their unusual combination of instruments. He also enjoys building new percussion instruments, such as Eva, developed with artist Rob van den Broek for a solo piece by Remy Alexander.
He has performed with the National Symphony Orchestra of Ukraine, The Hague’s Residentie Orkest, Asko|Schönberg ensemble, the Odessa Philharmonic Orchestra and the Orchestre Philharmonique de Strasbourg, among others, and has been the principal timpanist of the Mannheimer Philharmoniker (Germany) since 2014.
Konstantyn’s CDs appear on the acclaimed TRPTK label. His 2018 debut, The Collectors, received 4- and 5-star reviews in papers and specialised journals including De Volkskrant, Gramophone, and BBC Music Magazine. Recent live registrations from the main halls of Amsterdam’s Concertgebouw (Droplets II) and TivoliVredenburg at Utrecht (Obscure Atlas) are other testaments to his amazing versatility, control and mastery.

Konstantyn Napolov was educated as a percussionist and conductor in Kyiv. In The Hague, he completed his studies with Fedor Teunisse, Luuk Nagtegaal, Hans Zonderop, and Wim Vos with honours in 2015. He was selected for the Erasmus programme by the conservatoire in the city with the world’s oldest percussion traditions, Strasbourg’s Cité de la Musique et de la Danse, where he studied with percussion legend Emmanuel Séjourné.
In 2015, he was invited to participate in masterclasses at the famous Center for Advanced Musical Studies in Chosen Vale (US) and awarded a prestigious Colin Currie scholarship to attend courses at New York’s Juilliard School and the Boston Conservatory. In addition, he took masterclasses with many well-known musicians, including Peter Sadlo, Mark Pekarski, Christian Dierstein, Paul Mootz, Marta Klimasara, Robyn Schulkowsky, and Nancy Zaltsman.
Konstantyn has been successful at international competitions, both as a soloist and with his ensembles. He won first and other prizes, places in finals, and nominations at ARD Musikwettbewerb München, TROMP Percussion Eindhoven, Kamermuziekconcours Almere, IPC Luxembourg, Oh Oh Intro The Hague, Dutch Classical Talent, the Belgrade International Competition, the Grachtenfestival Competition, and the Prins Bernhard Cultuurprijs.
At the World Percussion Group, he was awarded an over-two-months US tour, during which he also gave concerts and masterclasses in Mexico. In 2021 he was selected by the Dutch Ministry of Education, Culture and Science to represent Dutch art and culture as artist in residence in Egypt, and to tour with the renowned musician and composer, Ahmed Saleh. He had the honour to perform together with the famous show percussion group, Percossa, for the Dutch government and royal family.
Konstantyn is an official Adams, Zildjian, Vic Firth, Mike Balter Mallets and TRPTK music label artist.